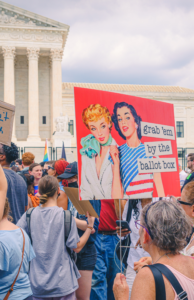 June 24, 2022, Washington DC. Protests at the Supreme Court of the United States on the day Roe vs Wade was overturned

Abortion was legal in all of the United States and every state had to have at least one clinic providing women with pregnancy termination procedures.

This had been due to a historic decision of the US Supreme Court in 1973, which closed the famous Roe vs Wade case by ruling that in all of the United States, it is legal for women to have a safe abortion.

Right-wing politicians and ultraconservative religious groups have been extremely disturbed by the ruling, but over the span of the last 50 years, America – as most of the world – has largely moved on. For five decades, numerous attempts to overturn Roe vs Wade had been unsuccessful, and the issue appeared to be a closed matter for most of society.

Furthermore, GI was quoted in an article written by Austin American Statesman, that “after 1975, mortality due to legally induced abortion also fell — from more than three deaths per 100,000 abortions in 1975 to about one in 1976 and even fewer thereafter”.

All of the above supported the general feeling that Roe vs Wade was there to remain – there was little reason to argue about something that not only was settled but also fading.

In reality, the debate was far from over because a large number of Supreme Court nominations, in recent years, have fallen into the hands of Republican presidents. Especially lucky was Donald J. Trump, who during his one term in office, nominated as many as three justices. In effect, despite Republicans winning the Oval Office only three times out of the last eight elections – and considering the longest-serving Justice was appointed by Bill Clinton – currently six out of nine Supreme Court justices are appointees of Republican presidents.

Spot-on image of how Gen Z tends to cope by taking everything as a joke. Don’t look up review

This dominance in the Supreme Court became important as this year Mississippi and Oklahoma followed Texas, a state which last year severely restricted access to abortion. Republicans hold a majority in state legislatures in all three states.

Legislation from Mississippi was challenged and went all the way to the Supreme Court. The legal contradiction between state and federal law which the state legislature created. Arguably, creating this contradiction was in big part the reason why Republicans adopted anti-choice laws in the states they control – Republican politicians knew Trump had created a majority that could really overturn Roe vs Wade.

The news broke on the 2nd of May, 2022, when the American edition of POLITICO magazine published a leaked draft of the ruling. Penned by Supreme Court justice Samuel Alito, the document outlined the intention of a majority of Supreme Court justices to overturn Roe vs Wade, and give state legislators the right to decide if and under what circumstances termination of pregnancy would be legal. 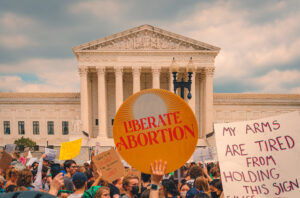 What do we tell our children? Protests at the Supreme Court of the United States on the day Roe vs Wade was overturned

It was a result of a vote held months earlier, during which five right-wing justices on a nine-member Supreme Court supported overturning the ruling on which women rights in the US are founded.

Unsurprisingly, the decision was met with fury. Marches and demonstrations are to be held throughout “the summer of rage” as large groups have been seen holding signs such as on Twitter, of coat hangers – symbolizing the measures women had to take before the legalization of abortion – and slogans, such as “my body, my choice”, “we will not go back”, “abortion is healthcare”.

The non-profit online news website, The Mississippi Free Press, outlines the attempts of campaigners defending women rights to block the effects of the ruling, but experts consider their chances to be slim.

The Supreme Court consists of nine justices, and the five-strong majority which voted for Roe vs Wade to be overturned, includes four men (Samuel A. Alito, Clarence Thomas, Brett Kavanaugh, Neil Gorsuch), and only one woman (Amy Coney Barrett). In reserve, they have Chief Justice John G. Roberts, who, according to POLITICO, did not vote, but his radically conservative views are publicly known. All of them had been appointed by Republicans.

The minority voting against the decision consisted of two women (Sonia Sotomayor, Elena Kagan) and one man (Stephen Breyer) – all of whom were appointed by Democrats.

Effectively, Dobbs v. Jackson Women’s Health Organization ruling, which removed the right for abortion in the US was done by a group which is 80 percent male, 80 percent white and 100 percent in their 50s, or older. The societal group which is going to be affected by the change, is the complete opposite: 100 percent female, unproportionately non-white, not priviledged, and predominantly aged between 16 and 40, mostly in their 20s and 30s.

The group of mostly middle-aged men with small, or even nonexistent medical knowledge, should not be the ones that have the power to decide if a girl or a woman should have an abortion or not. They are in no position to decide – in 2022, reproductive rights should not be determined by middle aged white men, like it was back in 1950. Hence, how non-profit abortion rights organization, Planned Parenthood, rallies poignantly called it a “Bans Off Our Bodies”.

In 1973, the Supreme Court of Justice decided that it was unconstitutional to impose restrictions on abortion before the fetus is viable. What the Supreme Court is preparing is a debate which is a reverse back to the past – and seems not to acknowledge anything that has changed over the last 50 years.

During the last five decades, however, abortion has progressed and developed - unlike the American conservatives who seem to be rejecting the world’s advancements. 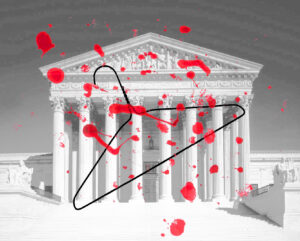 In the 21st century, most abortions are done at a very early stage, using pharmaceutical means, that is a pill. No matter how hard the Republicans will try, in 2022 online orders with shipping exist, and unless all parcels are going to be controlled on state borders, most women will keep access to safe and affordable abortion.

Last year, the US Food and Drug Administration (FDA) permanently allowed for abortion pills to be ordered by mail. At this time, The New York Times also reported: “California and New York, which have taken steps in recent years to further solidify access to abortion, are expected to increase the availability of the method and provide opportunities for women in states with restrictions to obtain abortion pills by traveling to a state that allows them.”

However, there is one group that is going to be seriously affected by the bans imposed in Oklahoma, Texas and other states where abortion will become illegal overnight – teenage girls. Imagine a teenager coming from a very conservative background, who cannot reasonably expect for her parents to support her in any way. As much as $50 can be a lot in a teenager’s budget and traveling to another state would involve not only the question of money, but also of providing a reasonable explanation at home and school. Without abortion clinics, whose existence in every state was enshired by Roe vs Wade ruling, these girls are going to be the ones truly hit by the decision brewing at the Marble Palace on One First Street.

This is going to be extremely hard in case of rape survivors. If a woman cannot have a desired abortion, the child will be a product of hatred, and the mother will bear catastrophic consequences which enslavement in patriarchal world causes on their physical and mental health. Abortion saved women from forced motherhood, which is “female enslavement” – as Luna Hernandez, an organizer of one of the rallies in defence of Roe vs Wade, correctly put it into words shown in an article by The Guardian .

Those behind abortion bans claim they are protecting youth from corruption. Were they truly committed to protecting the young generation from the experience of abortion, rape, and abuse, they would invest in raising the education level, would stand behind programmes aimed at empowering young people through knowledge which helps them throughout their whole life, and would not fight those who try to help young people to understand the cruciality of protection and the notion of sexual health. One cannot be forced to learn to love oneself, or to make good and safe choices in life – this is achieved through partnership and education, not by authoritarian denial of rights.