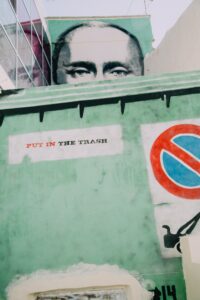 "We don’t want this war". The invasion of Ukraine is Putin’s, not Russians’ doing

In the midst of this conflict, the international community must remain aware of the vital distinction between Russians, and those in power in Russia.

In response to the full-scale invasion of Ukraine by Russian military forces, the West imposed severe economic sanctions on Russia. As occidental powers are trying to apply pressure on the Kremlin to withdraw its forces, many reasonable steps which may increase the squeeze on Russia’s budget are met with a number of nonsensical ideas.

While Shostakovich or Rachmaninoff probably wouldn’t mind not being played on the Polish Radio, the world has taken to expressing its anger on the Russian nation as a whole. An account from a friend of mine – a Pole visiting Dubai – may indicate what Russian people, no matter their opinion, may be enduring nowadays: mistaken for a Russian, she was spat on and abused. Hotel staff inquired whether she would be able to pay for her meal, claiming her cards may have been blocked.

It is not, however, at all justified to be angry at the Russian people as a whole, because this is not their war: Vladimir Putin is known to have personally manufactured this invasion, with the Russian people having less than no say in the matter.

Piotr, a Russian-Polish citizen, spoke to me on condition of anonymity, concerned for his safety. He was born and brought up in Poland, however, he had lived and worked in Russia for many years. What he described to me, amounts to a picture of a state apparatus which is complex, maleficent, invincible – something the Orwellian ‘Big Brother’ would envy – and one that serves only those at the very top. “We don’t want this war”, he stressed.

Six days ago, the war started. Ukraine and Russia, the two of my homelands

Most crucial in the maintenance of the dystopian world Russians inhabit is the machinery of censorship, which filters out any information that is not in line with the official government stance. In times of war, the Russian government automatically enacts an all-powerful censorship institution called ‘Roskomnadzor’ (Federal Service for Supervision in the Sphere of Telecom, Information Technologies and Mass Communications).

As a result, all media outlets are permitted to broadcast only one version of the news, strictly laid out by the government. Platforms such as Facebook, Twitter, and Youtube, which used to be the source of impartial and opposition information, have been rendered inaccessible. Russians can be put to jail for 15 years if their online presence is deemed to have challenged the official narrative of the Kremlin, and 20 years if they are considered “a traitor of the nation”. Article 275 of the Russian Constitution spells this out clearly: you are a “traitor” if you give any information, financial help, or give any services to a third party – corporate or individual. Furthermore, as of March 5th, foreign platforms like the BBC are banned from functioning on Russian territory.

“There is nothing left, but propaganda”, Piotr told me.

With this in mind, one can only imagine the kind of danger which hangs above the head of any citizen who wishes to support the Ukrainian nation in this conflict. From inside Russia, it’s impossible to do safely. With such heavy control put on the spread of information, the Russian government funnels the people with fake data and blatant lies about the goings-on in Ukraine, and, most importantly; the reason for its invasion. The myths of “denazification”, “liberation of the Ukrainian people”, a pan-slavic call for “the joining of long lost brothers” are all circulating the restricted Russian media.

The population seems to be divided into two major factions: those who believe the misinformation, and thus support or just conform to the Kremlin-shaped reality, and those who know or suspect they are being lied to, but are unableto express their opposition.

There is, however, a third faction. Despite the dangers, some have tried taking it to the streets, facing en masse detention, and, at best, heavy fines. “Russians know the consequences of protesting and so they do it only in really dire situations”, Piotr said.

According to OVD-Info, reporting on March 6th, since the invasion began on February 24th, 12.709 anti-war protesters have been detained. That adds up to over 1,155 arrests targeting the opposition - every single day.

This practice incites terror. As a testimony to how indiscriminate the Russian repressions are, Piotr told me a story of a friend, who got caught up in one of the protests by accident. Being a delivery man, he was carrying a package through an assembly spot of protesters when the police cracked down on anyone at the square. The delivery man ended up in jail for 48 hours, was heavily fined, and the information about his jail time became a part of his permanent record.

The West should remember that while freedom of speech, opinion, and the right to protest are enshrined by law in democratic countries, the Russian Federation enjoyed only a bit of democracy and, a long time ago. Therefore, anger directed at the Russian nation as a whole is completely unjustified – they are merely under the control of an omnipotent tyrant, who sent out the military under his own accord. It is important to remember that many Russians are now willing to endure extreme hardship – not in order to support the Kremlin, but to see the end of Putin’s rule. 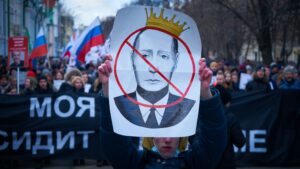 The Kremlin brutalises its citizens not only when they take to the streets. Those, who are a part of forces invading Ukraine, should also, in many instances, be perceived as victims of Putin’s regime.

According to the Ukrainian army, Russian soldiers taken as prisoners of war (POW) often claim they were told that they were being transported to exercise, not a real battlefield, and did not even know when they had crossed the border.

This was not the only lie: those who knew where they were being sent were made to believe they would be greeted in Ukraine by an awaiting nation, celebrating their final “liberation” from the “Nazi government”. What they encountered was the complete opposite: according to what Ukraine’s ambassador to the United Nation, Sergiy Kyslytsy, told during one of the emergency meetings of the UN, Russian soldiers were as surprised as horrified to see Ukrainian people throwing themselves under Russian tanks to stop them.

Arguably, a significant proportion of Russian soldiers now trying to squash Ukraine’s independence do so because they don’t see any way out, or they still genuinely believe what they have been told. Yet, low morale of the Russian army is a testimony – now even Russia’s soldiers don’t want this war. There are reports of early surrenders, straightforward defections, or plain instances of sabotage to Russia’s war efforts, with soldiers claiming their tanks malfunctioned or they had run out of fuel. For many, anything, it appears, is better than taking part in this war.

Unsurprisingly, misinformation has enveloped the way the Russian government reports casualties Russia suffers. As of March 6th, Ukraine claimed that 11,000 Russian soldiers have been killed, whilst Russian ‘Roskomnadzor’ still reports less than 500 fatalities. The results are bizarre, to say the least: it is the Ukrainian government who created a system providing details of Russian soldiers they encounter dead, or those they hold as POWs, which allows the clueless Russian military families to learn what has happened to their sons, husbands, or brothers. The system has since been banned by the Russian state.

The extent of misinformation used against all factions of the Russian public makes it impossible to attribute responsibility to Russian society. They should be perceived as the additional victims of Putin’s political agenda also because they did not even elect Putin as the President of the Russian Federation. According to international observers, parliamentary and presidential elections in Russia are unfair and being falsified.

Putin and his United Russia party are set to remain in power indefinitely, and this unconstrained power is precisely what allowed the ruler of the Kremlin to sow chaos throughout Ukraine as well as within his own country.

Seeing the extent of government control over information, which has nearly completely impeded Russians – both civilians and troops – ability to learn the truth of this war, it can only be fair to point all of the blame towards the Russian oligarchy, which is the president and those who support him.

In the midst of this conflict, the international community must remain aware of the vital distinction between Russians, and those in power in Russia. In the context of the war, the two have little to nothing in common. This is not a Russian invasion, it is Putin’s invasion – and, as Piotr put it, “confusing one with another is like pouring more oil into the fire”, giving Putin exactly what he wants. 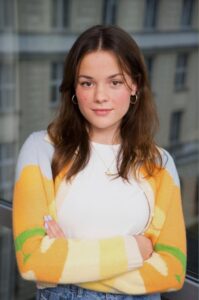 Born in 2004 in Warsaw, Poland, Mary Stabińska is currently preparing to complete A Levels in Politics, French, History, and Polish. She speaks English, Polish, and French fluently. At Harbingers’ Magazine, Mary writes and edits the Politics & Society section.