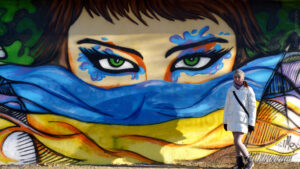 A mural in Ukraine.

‘It feels like I am living someone else’s life’, says Viktoriya, teenage refugee from Ukraine

On the 24th of February, the Russian Federation invaded Ukraine. It was an escalation of the Russian offensive against Ukraine, which has been ongoing since 2014.

The attack, though unsuccessful in military terms, has over the period of over eight months resulted in tens of thousands of dead and injured and endless material losses. Putin’s attack has also sparked the largest movement of refugees in Europe since World War 2. According to the United Nations High Commissioner for Refugees (UNHCR) data, over 7.5 million Ukrainians were forced to seek safety abroad.

In most instances, Ukrainian refugees are women, children, and the elderly, who left their home country for Poland and await the end of the war in Europe. The martial law introduced by the Ukrainian government does not allow men of fighting age (18-60) to leave the country.

The following conversation has been edited for clarity and consistency.

MARCO MORCHIO: Our readers would wonder: who is Viktoriya…

VIKTORIYA LYSENKO: I am 17 years-old, I love dancing, doing yoga, and reading novels.

In Ukraine, I graduated from school, as our schools only have eleven grades. I planned to continue my education at a university in Ukraine, but everything changed when the war started.

I fled to Italy with my mom and my sister. We moved in with my aunt and spent a couple of months with her family. Afterwards, we moved to Canada. We had the fortune to be able to move to Canada, because another of my aunts lives there; she was able to host us.

What do you miss the most?

My dad is still in Ukraine, I miss him very much. I miss my old life, and all my friends…

More than anything I miss stability, although I would like to underline that I am very lucky because I have two aunts who lived abroad, and therefore I had a place to go to. I cannot imagine how horrible it must be when one has no place like this. Thousands of people experienced it.

I personally know a mother with three children, who had no money, and no family abroad. They had to go in blind, with nothing but the hope that someone would help them.

The war started on the 24th of February. What emotions did you feel?

When the war started, I felt confident and fearless. I believe because we had to move fast and think fast, my adrenaline was boosted and this made me experience confidence.

Over time, I calmed down and processed the situation. As I realised that my life was not stable anymore, my home was not safe, a feeling of fear started to develop inside me. Everything was happening so close to me and I was scared for my life and the lives of my friends and family.

Many of my friends felt anger and hatred. This could be understood as their lives have been destroyed, and no one was helping them, but this is not what I felt. I received a lot of support and was able to move out of Ukraine very quickly.

I also would like to say that migration is incredibly hard. At first, you feel lost. You are in a new situation, out of your comfort zone, and you must move, think, and act fast. As time passes, you stabilise and understand the situation better. It is a time when you start to miss your home and everything that you had in your old life. But you also know there is no way back, so you have to move on and try not to think about it as much as possible. 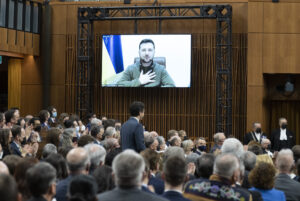 March 15, 2022, Ottawa, Canada. The president of Ukraine Volodymyr Zelenskyy listens to the Prime Minister of Canada, Justin Trudeau, before speaking to he Canadian Parliament.

Given your experience, what is the greatest challenge a person seeking refugee faces?

For me, the greatest challenge is to live a normal life when you do not feel ‘normal’. A person’s life is full of everyday habits, such as taking a bus to school or seeing friends. Now, once I moved, I had to build all these small habits from zero.

In Canada, where everything feels strange, different, and new, I never feel fully at home and completely safe. It simply does not feel like I am living my life, but, effectively, someone else’s life. It is tough to find stability.

On the other hand, this war has changed me by helping me to develop mentally. I had to learn and understand new cultural customs, many of which were very different from Ukraine. I had to embrace and respect them. I believe this new skill will be very useful in my future, especially for work.

I would like to add that even though this is a very difficult situation for the Ukrainian community, I am very proud of being Ukrainian. Despite everything, we are fighting, we are not giving up.

You have settled in Canada, at least partially. Were you given a chance to return to Ukraine in the future, would you move back or remain in Canada?

The situation in Ukraine remains very difficult, and the bitter truth is that stability is not part of the near future for Ukraine. Of course, I would like to come back home one day, but it is not my plan for now. I would prefer to stay in Canada, to regain stability in life. I would love to start making plans for my life without fear that someday I will need to rush, leave everything and vanish. We will see how it goes!

If you could advise someone who finds themselves at the beginning of your path, what would you say?

I would advise not to have expectations. People tend to build illusions in their minds, and usually, as these illusions are destroyed in confrontation with reality, the person is disappointed.

I would also tell them to make plans for the future. Even if the future is far from great, this gives some kind of stability, something to work towards, a goal in life. This is crucial, it helps you fight against all the difficulties. There will be days where you feel down and awful, but there will also be days where you feel good and invincible, and you have to move slowly, step by step, towards your goal, despite everything.

You also have to be very open-minded when you come to a new country, to not be afraid of making mistakes, and taking every opportunity to meet new people. Lastly, I would advise everyone to bring warm clothes to Canada! 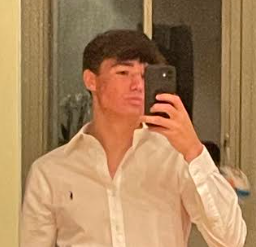 Born in 2005, Marco studies in Milan, Italy. He is interested in mathematics and economics and plans to study economics and finance management. For Harbingers’ Magazine, he writes about Italy and contributes with features on current affairs. Marco, who speaks  Italian, English, and French, is also Italy’s youngest student athlete playing for a semi-professional football team.